Four years after he took an escalator ride that upended American politics, President Trump will officially launch his 2020 reelection bid Tuesday night at a jam-packed arena of 20,000 people in Orlando, Florida. More than 40 hours before the president’s re-election bid supporters started lining up outside the Amway Center.

Even after he took office in January 2017, the president never stopped campaigning. He has held rallies in key electoral states and reeled off his achievements at every turn. But the event in Orlando on Tuesday will kick off a 17 month-slog in which Trump will try to knock off a Democratic challenger’s intent on denying him a second term.

Trump is sitting on a war chest topping $40 million, has boots on the ground spread across nine regions crucial to his 2020 map and owns a sprawling network of volunteers who’ve been rigorously trained for the months ahead.

By kicking off his campaign in Orlando, Trump hopes to keep his foothold in a state that delivered 29 electoral votes on his way to the White House in 2016. The president carried Florida by about a percentage point in 2016. Last year, Republicans won closely contested statewide races for governor and U.S. Senate there.

Trump’s campaign team has spent two and a half years building a robust, modern and professional operation to optimize as many variables as possible and amassing an unprecedented pile of cash to keep it all afloat, and so far, it’s worked out well.

The Trump campaign and Republican National Committee had a combined $82 million in the bank as of April — the result of a joint fundraising operation — and staffers have yet to devolve into the bitter infighting that strained the president’s first campaign and stained his earliest days in the White House.

Highlighting the enthusiasm on the ground, Trump and his campaign have been tweeting in the run-up about the early-gathering crowds, with some supporters arriving more than 40 hours in advance to secure a spot in the arena.

“Going to be wild – See you later!” Trump tweeted Tuesday morning from Washington.

The Fake News doesn’t report it, but Republican enthusiasm is at an all time high. Look what is going on in Orlando, Florida, right now! People have never seen anything like it (unless you play a guitar). Going to be wild – See you later!

“Thousands of people are already lined up in Orlando, some two days before tomorrow nights big Rally,” Trump wrote on Twitter late Monday night. “Large Screens and food trucks will be there for those that can’t get into the 25,000 capacity arena. It will be a very exciting evening! Make America Great Again!”

Thousands of people are already lined up in Orlando, some two days before tomorrow nights big Rally. Large Screens and food trucks will be there for those that can’t get into the 25,000 capacity arena. It will be a very exciting evening! Make America Great Again!

Trump also has time on his side Fox News reports.

Four years ago at this time in the election cycle, Trump was still considered a longshot for the presidency. The real estate mogul and reality TV star had just declared his candidacy and joined a field of contenders for the GOP nomination that eventually reached 18. What came next was a nasty fist fight between the leading contenders – with Trump emerging in the spring of 2016 as the party’s nominee.

This time around, it’s the Democrats who face a potentially divisive primary – with an historic 23 candidates vying for the nomination. The Trump campaign and the RNC hope to capitalize on the bruising battle as they portray the Democrats as a party moving too far to the left. 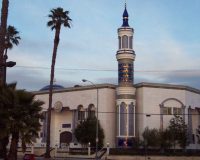 Californians Object to Islamic Call to Prayer Over Loudspeakers at 4:30AM
June 2nd, 2020 Sons of Liberty Media
© Copyright 2020 Your Daily Pulse. All rights reserved.